And by this, I mean the COLD! Coming from Oklahoma, where we often have below freezing temperatures, one would think the 30’s (in Fahrenheit) aren’t too bad for February. However, the problem in Valencia is that the older apartments are not properly equipped for several weeks of cold weather. Mi piso only has single paned windows, AKA: it’s the same temperature inside as it is outside. You can imagine how unpleasant this is! I don’t mind the cold when it’s outside. Sure, I don’t like it, but it’s not the end of the world. The problem is when I come home and I still have to wear two layers of clothing! I carry my mini space heater around my apartment with me as if it was a baby. Luckily my mom bought me a blanket (throw, if you will) at the airport that I also carry around with me like the pacifier for my baby. I remember when the weather first started dipping into the 50’s and 60’s in mid-October and I laughed at the Valencians who were wrapped up in scarves and winter coats. I now realize that when you are accustomed to a certain type of weather (warm!) that when it’s below your norm, it’s awful! So no longer will I scoff at those who have winter coats in 50 degree weather! I have become one of them. But the weather is unusually cold for an unusually long time this year. All of Europe is suffering from extreme cold. Northern and Eastern Europe have it way worse, so really I don’t have a lot to complain about.

Of course, this all started the week my best friend came to Spain for my birthday! Coldest temperatures in Valencia for about 7 years…but luckily it never rained and the sun was shining. Could have been worse 🙂 It was so great to show her around the city, introduce her to my friends, and just catch up on life in general. We hit the highlights of the city, including the City of Arts and Sciences, Central Market, the city center, and a few museums. For the weekend of my birthday (4 February) I had a dinner with a lot of friends at a nice Spanish restaurant. We had tapas, bocadillos, sangria, and coffee. It was very delicious! People even gave me presents, which was so nice. That was definitely not expected! I got a beautiful dress and scarf from my favorite store, a nice travel bag and wine, a silly birthday mug, a handmade passport holder and a huge box of chocolates! We went to my apartment after dinner for some wine and two wonderful friends surprised me with a cake and a nice card. Then we all went to a club near the port of Valencia and danced the night away! At one point I looked around, and realized that most of the people I’m friends with in Valencia were all together. I’m happy they all got along and hopefully some new friendships were made. 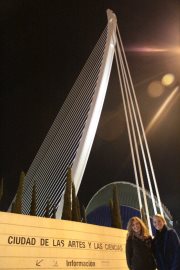 For my actual birthday (6 February), I had to work, but my best friend took me to lunch! Later that day, we went to my awesome Spanish friend’s house and made dinner. There were 5 of us in total, and my friend gave me some Spanish books, which I had been wanting! One was a Spanish-English slang dictionary and it is absolutely hilarious. We spent a long time reading the translations of words like “bootylicious” and “TGIF”. It wasn’t unusual to not be with my family on my birthday, but to not see them at all was strange. Usually I see them in the beginning of February to celebrate at some point, but this time it was only Skype, emails, and cards. Which are also very appreciated! 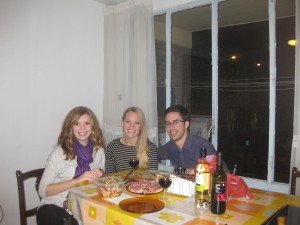 It seems that every few weeks I get frustrated with teaching. I know that the kids are learning something, but sometimes I think that they aren’t really paying attention and could care less if they were there. I try and do new things to hold their interest, mixing it up with games, chalkboard teaching, exercises, songs, etc. But there’s always one each class who makes things difficult. It’s nearing the time of their next exam, so I’m trying to prepare them. We will see how they do after the practice exams next week. That helps me know what they need to review or learn more of. As long as they don’t cheat! I always stress that the practice exams aren’t for a grade and it’s to help ME know what I didn’t teach them properly. Some of them realize this, but others still try and cheat just to not get too many answers wrong. But we will see what happens after the actual exams.

I finally started taking Spanish lessons! It does make me realize how hard it can be for students learning another language, because a lot of it is repetition. I have a private teacher who is awesome, and it’s really nice that the lessons are customized to my needs. She knows what I need to learn (which is a lot) but uses each lesson to introduce whatever I need to learn and always gives me homework. I do need to study more on my own though, but slowly I am improving. Every week I am able to understand movies, radio, TV, people, etc. better and that is a good feeling.

Hopefully during the next post, I won’t be wearing two layers of clothing and a blanket! The weather is supposed to be improving and I am waiting anxiously for this to happen. I hope the beginning of February is going well for everyone, wherever you may be! Espero que 2012 es el año es un feliz para todos!

This was my first time to walk across El Puente de l’Assut! I was very excited! 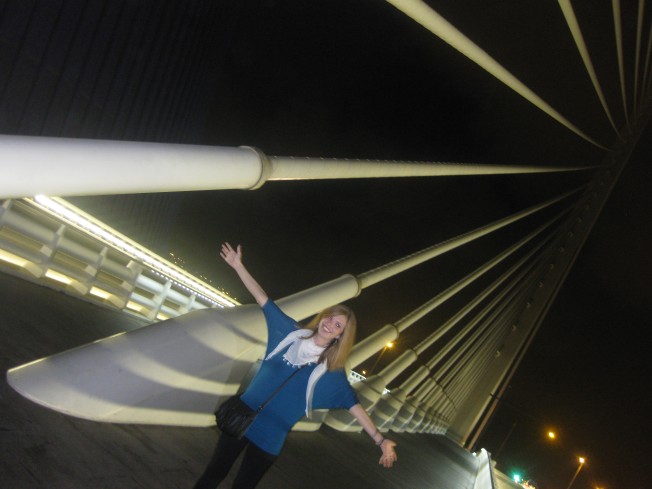